Orono, Maine – The University of Maine System Board of Trustees unanimously voted to appoint former Connecticut Governor Dannel P. Malloy the next Chancellor of the University of Maine System.  The appointment concludes more than a year of succession planning that included the development of a multi-year Declaration of Strategic Priorities and a national search for a leader.  Chancellor James Page will retire on June 30, 2019. 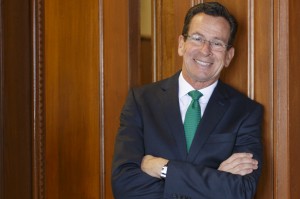 “Dan Malloy is an executive leader and public servant committed to taking on complex change initiatives and getting the job done,” said James Erwin, Chair of the UMS Board of Trustees.  “As governor he delivered reforms and structural changes to state government that were not always popular, and certainly not expedient, but that advanced the long term interest of his state and its citizens.

“We are committed to continuing down the path envisioned for public higher education in Maine by Chancellor James Page.  The Strategic Priorities the Board adopted in December and the selection of Dan Malloy as our next chancellor are clear indications of the Board’s resolve to expedite our One University reforms.

“Under Dan’s leadership we will help lead Maine’s response to our workforce shortage and skills gap by connecting more of what we teach directly to a job, by reaching more adult learners and other Mainers underserved by higher education and lifting their Maine-career aspirations, and by continuously including new approaches to what we teach and how we teach it to meet the competitive challenges of today’s higher education marketplace.”

“Dan Malloy understands what higher education means for the future of a state and its people and is willing to put himself on the line to ensure that that future is bright,” said Charles Hewett, Ph.D., Executive Director, Institute for Digital Engineering and Life Sciences and former Executive Vice President and Chief Operating Officer at Jackson Laboratory.

Former Governor Malloy brings 22-years of public service and executive leadership to the University of Maine System including eight years as Governor of the State of Connecticut and 14-years of service as the Mayor of Stamford, Connecticut.  The two-term governor was first elected in 2010 and won re-election in 2014. He choose not to seek re-election in 2018.

Accomplishments during his tenure leading the State of Connecticut included the creation of 124,000 private sector jobs and prioritizing the state’s long-term fiscal health through structural reform.  The Malloy administration achieved a 13% reduction in the size of the state government workforce, secured agreements with the state bargaining unit resulting in $40 billion in savings to taxpayers, replenished the state rainy day fund to more than $2 billion, and fully funded the actuarially required state pension payment every year.

Please follow this link to a report on the accomplishments of the Malloy administration.

“My time in electoral politics is over, but I am still passionate about providing public service leadership that matters,” said Chancellor-Designate Dannel Malloy. “Maine has set a national example for public higher education reform, and I am eager to work with the Board, the presidents, faculty, staff, and university supporters to build on this progress for Maine’s learners.

“The Board’s Strategic Priorities sets expectations and direction for our work.  We have to act with urgency — Maine’s workforce challenges grow larger by the day.  Decisions will come fast, but they will be informed. I will be devoting many of my first days to visiting the campuses.  I want to meet with new colleagues, hear from students, and see first-hand how our universities are serving the people and communities of Maine.

“I want to thank the Board for this opportunity to serve and Chancellor Page for providing a vision for public higher education in Maine and for his gracious offer of support during our transition.”

Following his public introduction Thursday morning, Chancellor-Designate Malloy will travel to Augusta with Chancellor Page to meet with leaders from the Maine Community College System, the business community, and the State House.

Chancellor-Designate Malloy will be returning to Maine throughout the month of June to meet with university leaders and stakeholders in preparation for assuming the Chancellorship following Chancellor Jim Page’s retirement on June 30, 2019.

“In our rural campus communities of Fort Kent, Farmington, Presque Isle, and Machias we understand how public higher education contributes to the vitality and economic future of where we live,” said Kelly Martin, Vice Chair of the Board of Trustees.  “Our campuses are anchor institutions for our regions and we are eager to introduce Dan Malloy to our programs, students, and partners.”

“We have made great progress under Chancellor Page’s leadership. We needed to be sure our leadership succession planning and national search for a new chancellor produced a leader with the experience and skills to continue and expedite our progress,” said Sam Collins, Trustee and Chair of the Search Committee.

“The Board unanimously endorsed Dan’s appointment because he understands what is at stake for Maine.  We also agreed that while a chancellorship is a nonpartisan appointment, many of the leadership attributes that contributed to Dan’s success in elected office will be important to his work in the University of Maine System.”

Included among the chancellor’s responsibilities is advocacy for public higher education with elected officials, external stakeholders, and the general public.  Board Policy 214 provides guidance for the chancellor and campus presidents to ensure the political nature of this work remains nonpartisan and politically impartial.

As governor, Dan Malloy was a strong supporter of public higher education reform and innovations that improved affordability and outcomes for students and created stronger links to workforce opportunities in Connecticut. Accomplishments made during the Malloy administration include:

Dan Malloy was also a member of the local Board of Education in Stamford, Connecticut.

Follow these links to Dan Malloy’s resume and biosketch